The elliptical is becoming an increasingly popular alternative to the treadmill. This is largely owing to the elliptical’s status as a low impact stationary exercise machine, which means it will put minimal stress on the joints when in use. This means it can be safely used by those with joint issues, such as gout and arthritis, without risk of aggravation. As well as being a good choice for those plagued by joint pain, the elliptical is a great way to stay in shape for the elderly and those nursing an injury.

Of course, if you fall into one of those categories, there is a chance that your earning power is limited and it is likely that much of your income goes to clearing medical bills and paying for medication, meaning a $3,000 elliptical may not be an option. Don’t worry – we’ve got your back! There are dozens of elliptical machines offering both quality and affordability, and we’re going to be discussing the very best of them in this article. So let’s see which is the best value elliptical. 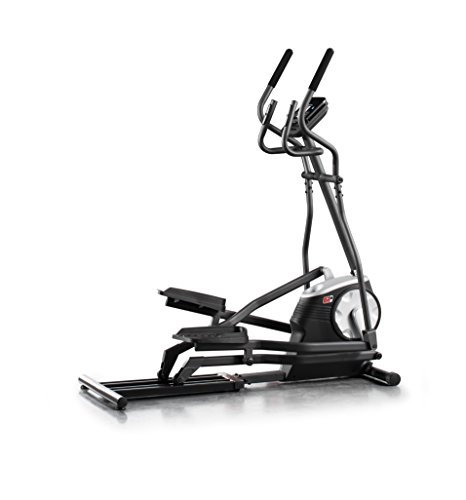 “Take your resistance to your next level.” So goes the motto of the ProForm 150i Ellipticaland boy is that true. ProForm equipped this elliptical with a total of 12 resistance levels, which will allow you to increase the intensity of your workouts for greater calorie burn as you progress through your weight loss journey. Although weighing 127 pounds itself, the 150i has a weight capacity of 250 pounds, which is actually about 50 pounds in excess of what is commonly considered obese.

Despite being an affordable elliptical – ProForm generally asks for a little over $300 – the 150i boasts a variety of high-tech features, such as iPod and iFit compatibility. The various levels and models of this elliptical can be controlled through its easy-to-read LCD display, which is beneficial given the fact that ellipticals are commonly used by the elderly as an alternative to treadmills and rowing machines.

Moving gym equipment from one room to another can be pretty difficult, which is why ProForm fitted its 150i Elliptical with heavy-duty wheels. These wheels allow the machine to be moved from place to place with ease, putting little pressure on the body, much like an elliptical workout. Meanwhile, adjustable feet allow the machine to be placed on a variety of surfaces, meaning it can be used both indoors and outdoors without much issue.

ProForm’s confidence in the quality of this elliptical is such that it offers a generous five-year warranty on its frame. Similarly, the manufacturer promises a 90-day parts and labor warranty, so you will be covered should any issues present themselves in the weeks immediately following purchase.

One of our major issues with the ProForm 150i Elliptical pertains not to its performance, but to its assembly. This is certainly one of the more challenging ellipticals to assemble, and those who purchase it should be prepared to spend three or four hours on their knees, sifting through nuts and bolts and trying to figure out what part of the machine goes where.

If you are hoping to lose a lot of weight in a short period of time, you may want to go with a different elliptical. We say this because the strides of the 150i are rather small when compared to those of many other models and hence make for a workout that is not quite as intense as one would need to see results within a week or so of use. 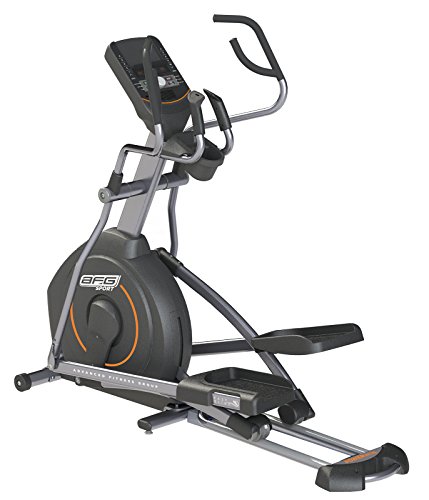 Selling for close to $900, the AFG Sport 5.9AE Elliptical will set you back a couple of hundred more than the previously examined ProForm model. But for your extra money you’ll get some pretty nifty features, chief among them a heavy-duty 23-pound flywheel which works in conjunction with the machine’s precision drive system for smooth movement regardless of the programmed level of resistance. Speaking of resistance levels, you won’t have any shortage of them with the 5.9AE because AFG Sport equipped this elliptical with 16 different resistance levels, along with 20 levels of incline and a total of 43 workout programs.

A workout is always easier with music, which is why AFG Sport fitted the 5.9AE Elliptical with a fully integrated audio system that can be paired with smart devices through Bluetooth. This elliptical boasts a weight capacity of 325 pounds, which is nearly 100 pounds above that of the ProForm 150i Elliptical.

If you’re so busy that you have to make and take calls even during your workouts – you’re not alone – you no doubt understand how frustrating it can be to have a low battery while you go about your exercises. It seems that AFG Sport understands that too, as the brand equipped its 5.9AE Elliptical with built-in USB ports for easy charging. To further heighten the experience of the user, the manufacturer also designed the AFG Fitness app, which can be accessed through smartphones and tablets alike.

To reduce the risk of you overheating or dehydrating while in the middle of your workout, the AFG Sport 5.9AE Elliptical features an included cool-breeze fitness fan, which operates when the machine is in motion.

One of the major issues with the AFG Sport 5.9AE is the accuracy – or inaccuracy – of its heart rate monitor. This may not seem like a big deal to somebody who is only concerned with getting their workout completed, but if you suffer from any sort of cardiovascular condition and must keep an eye on your heart rate as you exercise, you should consider purchasing an exterior heart rate monitor to use in conjunction with this elliptical rather than relying on the integrated alternative.

It should also be noted here that some customers who have had problems with this elliptical have reported that AFG Sport’s customer helpline was not of much help at all. Many have experienced difficulties getting the brand to honor their warranties while others haven’t had theirs honored at all. 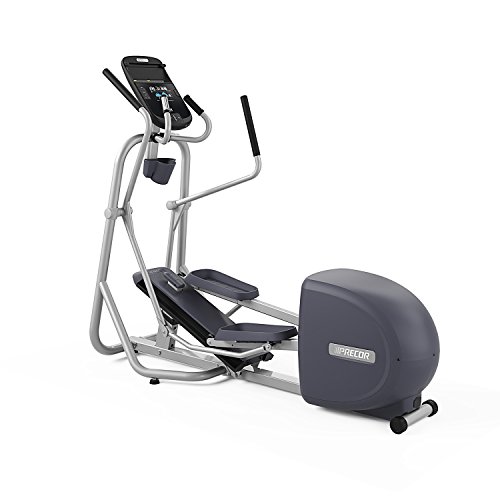 Precor was responsible for the very first elliptical back in the 1990s, so it shouldn’t come as much of a surprise that the brand remains at the top of the fitness industry today. Largely as a result of the manufacturer’s reputation, the Precor EFX 222 Elliptical sells for over $2,000, which makes it the most expensive model to appear in this article by quite a significant margin. In order to justify its high price tag, Precor fitted the EFX 222 Elliptical with its patented CrossRamp technology, which allows the user to alter the machine to focus on specific muscles per workout. Furthermore, the EFX features 12 pre-programmed workouts and a five-inch high-contrast screen through which they can be accessed.

Many less expensive ellipticals feature stationary handlebars. The Precor EFX 222 Elliptical, however, features moving handlebars. This may not seem like a particularly big deal upon first glance, but through the introduction of moving handlebars Precor has made it possible for the user to work both halves of their body at the same time, thereby increasing the number of calories burned per workout.

The Precor EFX 222 Elliptical is certainly of a high quality – it would want to be for upwards of $2,000 – but that doesn’t mean it is impossible to damage. Should any harm come to your EFX 222, you’ll be able to fall back on the five-year warranty which Precor promises on parts and wear items. Also included are a three-year console warranty, a one-year labor warranty, and a lifetime warranty on frame and welds.

This elliptical boasts an integrated digital touch sensor for heart rate monitoring, so you may want to consider it if you are battling cardiovascular disease and must keep track of your heart rate throughout every workout.

The most glaring drawback of the Precor EFX 222 Elliptical is its price tag is typically $2,200. Now, many Precor devotees argue that the high price of this elliptical is justified by its many features and Precor’s status as an industry leader, but it nonetheless renders this product impossible for more than a few fitness fanatics to purchase.

It should also be pointed out that some Precor customers have reported the EFX 222 to be rather difficult to assemble, largely because of the vague instructions which come included with it. Many retailers do offer professional assembly of the machine, but if you’ve already spent more than $2,000 you may not have much left in your budget to devote to expert intervention.

Choosing one of these ellipticals as the best value elliptical is a difficult task and one that will most certainly come down to a matter of opinion. That being said, our opinion is that you should go with the second model we examined, the AFG Sport 5.9AE Elliptical. Despite being more than $1,000 cheaper than its Precor counterpart, the 5.9AE boasts a greater selection of pre-programmed workouts. Similarly, it features four more levels of resistance than the ProForm 150i Elliptical, so you won’t have to switch to a more expensive model when the time comes for you to increase the intensity of your workouts.

While the AFG Sport 5.9AE is designed to push the user to the limit, the manufacturer was also mindful of the comfort of the user, which is why it fitted this machine with a cool-breeze fitness fan to combat dehydration and a precision drive system for smooth movement. Yes, you could save yourself a couple of hundred dollars by going with the ProForm 150i Elliptical, the least expensive product to appear in this article. However, if you are as serious about your workouts as you are about saving, the AFG Sport 5.9AE Elliptical is, as far as we’re concerned, the way to go.